Pelicans have just enough to get past Thunder 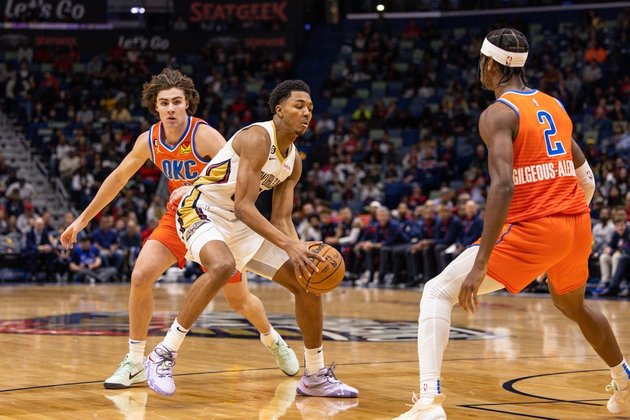 Zion Williamson scored 23 points, including a go-ahead basket in the final minute, as the short-handed New Orleans Pelicans held off the visiting Oklahoma City Thunder 105-101 on Monday night.

Robinson-Earl made a 3-pointer to give Oklahoma City a one-point lead before Williamson converted a three-point play that gave New Orleans a 103-101 lead with 44.4 seconds left.

After a turnover, Williamson missed a 3-pointer as the shot clock was expiring. Gilgeous-Alexander pushed the ball into the frontcourt and drove to the basket, but Jones stepped in front and drew an offensive foul. Jones' two free throws completed the scoring with 1.5 seconds left.

Gilgeous-Alexander scored the Thunder's first eight points of the third quarter as they crept within 64-58.

Murphy and Williamson answered with consecutive baskets that gave the Pelicans their first double-digit lead.

Williamson's basket pushed the lead to 75-62, but Dort scored seven of Oklahoma City's final 12 points as they climbed within 81-74 at the end of the third quarter.

Jalen Williams scored four points as the Thunder got within two points early in the fourth quarter, but New Orleans answered with a basket by Jones and a three-point play by Murphy.

The Thunder were the more aggressive team in the early going, opening a 16-8 lead as Williamson was called for the first technical foul of his career.

The Pelicans scored the next 10 points and took a 34-26 lead at the end of the first quarter.

New Orleans led by nine twice in the second quarter before Gilgeous-Alexander converted a three-point play to trim the lead to 56-50 at halftime.

Nearly a year in, the war in Ukraine has cost tens of thousands of lives and brought the world to ...

After Biden tapped US oil reserves, House passes bill to end such uses

WASHINGTON D.C.: The US House of Representatives has passed a bill that limits the ability of US Energy Secretary Jennifer ...

BOSTON, Massachusetts: Russian businessman Vladislav Klyushin, who has ties to the Kremlin, has been accused of making tens of millions ...

TOKYO, Japan: In light of a tense security environment following Russia's invasion of Ukraine and Moscow's growing military cooperation with ...

DALLAS, Texas: Oil and gas pipeline operators are preparing to stockpile equipment following severe weather forecasts for the next few ...

TikTok CEO to appear before US Congress to discuss security concerns

WASHINGTON D.C.: As US lawmakers investigate the Chinese-owned video-sharing app TikTok, its Chief Executive, Shou Zi Chew, has confirmed that ...

US concerned over rights at Mexico auto factory, seeks corrections

WASHINGTON D.C.: The US has again asked Mexico to investigate claims that workers at an auto parts facility of American ...

WASHINGTON D.C.: Tesla confirmed this week that the US Justice Department has requested documents related to its Full Self-Driving and ...

TOKYO, Japan: Toyota has announced that it sold 10.5 million vehicles in 2022, maintaining its position as the world's top-selling ...

Concerns about recession in Germany after economy shrinks in Q4

FRANKFURT, Germany: Data released this week showed that the German economy unexpectedly shrank in the fourth quarter of 2022, indicating ...