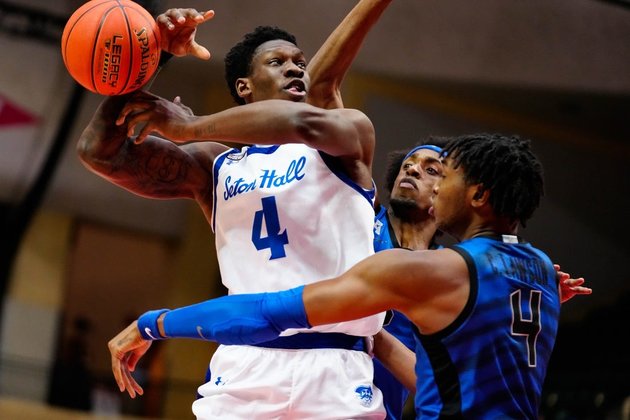 Tyrese Samuel banked in a 3-pointer at the buzzer to give Seton Hall a 70-69 win over Memphis on Thursday night in the first round of the ESPN Events Invitational in Lake Buena Vista, Fla.

Samuel, who led the Pirates (4-1) with 14 points and 11 rebounds, had 11 in the second half, including his team's final five points. He made 4 of 4 free throws in the final 1:10, and after Jamir Harris got a steal with 9.1 seconds to go it was Samuel who got the call on the last possession.

Memphis (2-2) had led almost the entire second half after going ahead late in the first half, but the Tigers didn't make a field goal over the final 3:14, spoiling a 22-point effort from Kendric Davis.

Davis, the reigning American Athletic Conference Player of the Year when he was at SMU, was 7 of 14 from the field and also added seven rebounds and six assists. He had to offset the rough night from senior forward DeAndre Williams, who fouled out with 8:47 left and managed just four points and three rebounds in 10 minutes of action.

The Pirates advance to the ESPN Events Invitational semifinals, where it will face Oklahoma on Friday evening. Memphis falls to the consolation bracket and will meet Nebraska on Friday.

Memphis led 31-30 at the half, and a jumper by Malcolm Dandridge -- who had 14 points off the bench -- upped the edge to 41-36 with 14:46 to go. But the Tigers became sloppy with the ball, turning it over on five straight possessions at one point, and finished with 17 turnovers.

Seton Hall used a 7-2 run midway through the first half to build a six-point lead, which it held until Memphis tied it at 30 with 1:42 left before halftime on an alley-oop from Kendric Davis to Keonte Kennedy. Kennedy later added a free throw to provide the Tigers' one-point margin at the break.