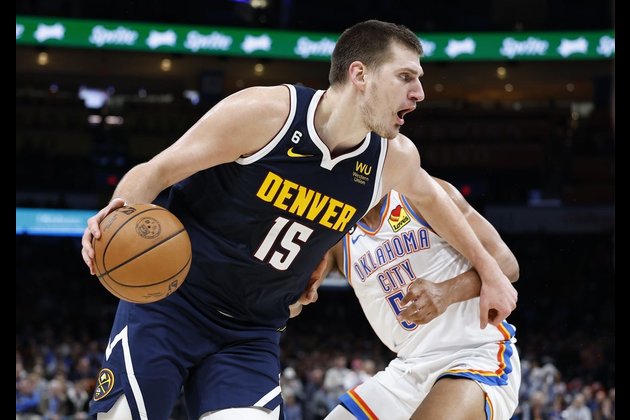 Nikola Jokic scored 39 and Aaron Gordon heated up late to finish with 30 to lift the Denver Nuggets to a 131-126 overtime win over the Oklahoma City Thunder on Wednesday in Oklahoma City.

The scoring totals were season highs for both Jokic and Gordon.

For much of the game, Jokic was carrying the bulk of the scoring load for the Nuggets, who were playing without Jamal Murray, Michael Porter Jr. and Bones Hyland.

But late in regulation and in overtime, Jokic got plenty of help.

As Jokic backed down a defender in the final two minutes of overtime, Vlatko Cancar cut to the basket and Jokic found him to put Denver ahead by five. Then in the closing seconds, Bruce Brown's floater all but put the game away.

Jokic finished with 10 rebounds and nine assists. He was 16 of 18 from the free-throw line as Denver attempted a season-high 41 free throws.

Shai Gilgeous-Alexander led the Thunder with 31 points and 11 assists. Isaiah Joe scored a career-high 21 off the bench, hitting seven 3-pointers.

The game featured several wild swings, with the Nuggets coming back from a 15-point fourth-quarter deficit after blowing what was a 19-point lead in the first half.

With Denver trailing by two in the final minute of regulation, Jokic backed down toward the basket before flipping the ball over his head to Gordon for a game-tying dunk.

Seven of Jokic's assists came in the second half and overtime.

The Nuggets poured it on early, building a 19-point lead little more than eight minutes into the game. Jokic scored all 14 of his first-quarter points during that stretch, helping Denver to a 33-14 lead.

The Nuggets lead was still 19 midway through the second before Oklahoma City closed the half with a 26-13 run to get back into the game.

Joe fueled the start of the comeback, hitting four 3-pointers in the last 5:19 of the half to pull the Thunder within six at the break.

Oklahoma City held Denver to a season-low 15 points in the third to extend its lead to 13.

Stocks markets across Asia Pacific rattled by protests in China