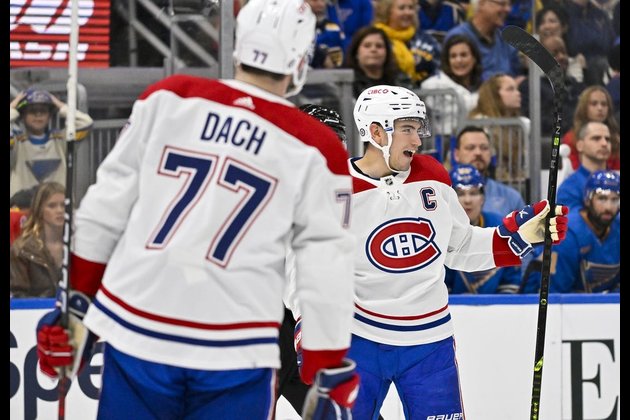 Nick Suzuki, Cole Caufield and Kirby Dach are emerging as a dependable core that serves the Montreal Canadiens quite well.

The relatively young trio will look to continue their early success and help beat the visiting Pittsburgh Penguins on Saturday night, when the Canadiens will aim for a season-high third straight win.

Montreal has scored 42 regulation and overtime goals during its 7-6-1 start. The 23-year-old Suzuki (nine goals), Caufield (eight) and Dach (four) -- the latter two who will turn 22 in January -- have combined for half of that total.

Dach scored twice, Suzuki had a goal with an assist and Caufield added an assist during Wednesday's 5-2 victory over Vancouver -- the Canadiens' second in a row following an 0-2-1 rut.

"There's a lot of things we feel we're doing well right now, and that's got to continue," Montreal forward Brendan Gallagher said. "And also a lot of areas we can correct."

Suzuki, the Canadiens' leader with 17 points, has blossomed into an NHL All-Star and team captain while starting his fourth season. He's totaled six goals with four assists in his last six games and has 21 goals and 51 points in the 51 games since Martin St. Louis took over as Montreal coach. The team is 21-25-5 in that span.

"(St. Louis) brought his own energy," Suzuki told The Hockey News. "He's a guy that likes to think about the game and teaches everyone."

After Pittsburgh's Evgeni Malkin opened the scoring with two second-period goals at Montreal on Oct. 17, Suzuki and Caufield tied it with a goal apiece in the third, and Dach's overtime score gave the Canadiens a 3-2 triumph.

Montreal's Sam Montembeault (3-1-1, 2.38 goals-against average) made 26 saves against Pittsburgh, and 31 vs. Vancouver this week. Meanwhile, Canadiens starter Jake Allen (4-5-0, 3.11 GAA) could have a chance to win consecutive starts for the first time this season after stopping 41 shots during Tuesday's 3-2 shootout win over Detroit on Tuesday.

Two nights after the Penguins ended an 0-6-1 slide with their 4-1 victory at Washington, they won 4-2 at Toronto on Friday to post consecutive road triumphs for the first time this season. Brock McGinn scored the tie-breaking goal 1:54 into the third period and Jake Guentzel added an empty-netter to push his consecutive-goal streak to four games.

"It's better winning games," McGinn, who has two goals in the past two games, told ATT SportsNet PIT. "Just play a full 200-foot game. We did a good job with that."

Malkin had a goal with an assist on Friday and has posted 10 of his 15 points for the season in nine road contests. He's totaled 12 goals and 16 assists in 23 career games at Montreal.

Fellow Penguins superstar Sidney Crosby has 58 points in 44 overall games against the Canadiens but was blanked at Montreal earlier this season.

Casey DeSmith (2.67 GAA) made 28 saves Friday for Pittsburgh in his second straight start. He made a season-high 36 saves at Montreal last month.

However, Tristan Jarry could be back in the Penguins' goal due to this back-to-back scenario. Jarry posted a 2.01 goals-against average while winning his first four starts, but since thenhe is 0-3-1 with a 4.73 GAA.

BUENOS AIRES, Argentina: A massive wave struck the Viking Polaris cruise ship this week as it was sailing toward the ...

After years of upheaval, US judge throws out Huawei fraud indictments

NEW YORK City, New York: Last week, a U.S. judge has dismissed an indictment against the chief financial officer of ...

PALMDALE, California: Northrop Grumman has unveiled its new B-21 "Raider" jet, the first in a new fleet of long-range stealth ...

Change comes to US auto union as reformers win elections

NEW YORK, New York - Stocks in the U.S. and around the world fell on Wednesday although losses were mostly ...

Hearing aids now sold without prescriptions in US

WASHINGTON D.C.: Hearing aids can now be sold without prescriptions from a doctor in the U.S., making it easier and ...

Musk confirms that apple to resume advertising on Twitter

SEATTLE, Washington: Amazon.com is planning to resume advertising on Twitter, pending some security tweaks to the company's ads platform, purchasing ...

Mexico, US plan joint strategy to lure businesses back to N. America