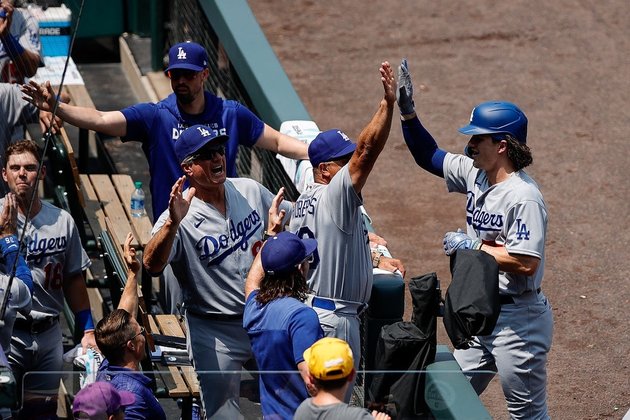 The Los Angeles Dodgers will feature a different look, and the San Francisco Giants will look for a different result when the National League West rivals meet in a four-game rematch series starting Monday night in San Francisco.

After a classic pennant race last season, the clubs are separated by17 1/2 games in the standings -- five more games than when they opened a four-game set in Los Angeles coming out of the All-Star break.

The Dodgers swept that series, outscoring the Giants 25-13 to formally turn the NL West into a two-team race with the San Diego Padres, while San Francisco was left to reconsider its priorities at the trade deadline.

Left-hander Andrew Heaney (1-0, 0.47 ERA) did not pitch for Los Angeles in the last series and has never faced the Giants as a member of the Dodgers.

He has made three starts against San Francisco in his career, going 1-2 with a 7.02 ERA. He faced the Giants twice last season as a member of the Los Angeles Angels.

Heaney has made four starts for the Dodgers this year -- two in April and one apiece following lengthy stints on the injured list with pain in his left shoulder. The 31-year-old has made one start since his second IL stint, shutting out the Washington Nationals over four innings on one hit in a 7-1 win on Wednesday.

Having beaten the Colorado Rockies on the road for the third time in four days, the Dodgers flew into San Francisco on Sunday night while the Giants were still in action against the Chicago Cubs. The Giants won that game 4-0 behind Carlos Rodon's 10-strikeout gem.

Rodon had a new shortstop behind him in the win. Dixon Machado, who had been playing minor league ball for the Cubs before the Giants, was asked to fill a big hole when Thairo Estrada (concussion) joined Brandon Crawford (knee) on the injured list Saturday.

It was an unusual transaction, trading with the team in the visitors' dugout.

"It's just weird, you know?" Machado said before contributing a single and a run to the win, as well as a hit-by-pitch. "Playing the Cubs is just awkward."

Right-hander Logan Webb (9-4, 2.91 ERA) will attempt to duplicate Rodon's feat. He had been unbeaten in four starts, allowing a total of just four runs, before giving up four runs in 6 1/3 innings in a 5-3 road loss to the Arizona Diamondbacks on Wednesday.

One of those starts was against the Dodgers in Los Angeles. He didn't get a decision in a 5-1 loss after giving up just one run in six innings.

Webb can expect to see the newest Dodger, James Outman, for the first time. Outman homered on his first major league swing in Sunday's 7-3 win at Colorado.

A native of Redwood City just south of San Francisco, the 25-year-old outfielder had split time at Double-A Tulsa and Triple-A Oklahoma City this season. He attended Sacramento State, where he was a teammate of Giants reliever Sammy Long.

As he admired his historic homer, Outman recalled thinking back to his childhood baseball days in the San Francisco Bay Area.

"Obviously, I dreamed of it playing Wiffle Ball in the backyard and stuff like that," he gushed. "I never really thought that it was gonna be something that was gonna happen."