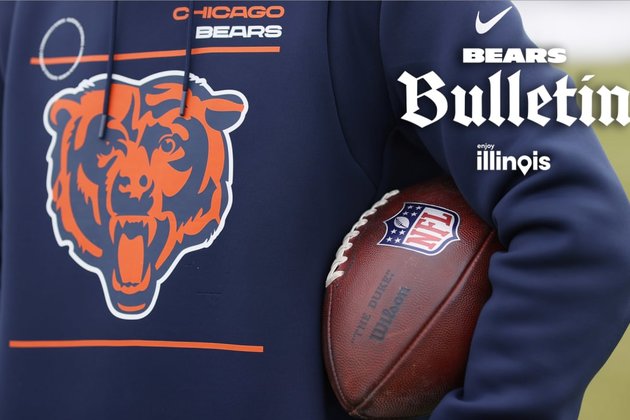 The Bears on Tuesday announced the hiring of eight new members to their football operations staff: three in the scouting department, two on the high-performance side, two in football technology and a chief of staff for coach Matt Eberflus' coaching staff.

Hicks arrives in Chicago after spending the last five seasons with the Falcons as a scouting assistant (2017) and pro scout (2018-21). In 2016, he was a recruiting assistant at Utah. After graduating from Georgetown College in Kentucky, he was an NFL offensive lineman with the Texans, Bengals, Broncos and Chargers from 2003-06.

Bradway spent the last three years with the Raiders as a player personnel scout (2019) and their BLESTO scout (2020-21). Prior to that, he worked for Stryker as a trauma sales associate for a year. Bradway played football at Temple, lettering twice and graduating in 2017.

Cavanaugh boasts 20 years of NFL scouting experience. Most recently, he served as college scouting coordinator at Ohio State in 2021. Before that, Cavanaugh spent 12 seasons as a Midwest and Northeast area scout with the Texans from 2009-20. He first worked in the NFL in 2000 in the operations department with the Colts during minicamp and training camp. In 2001, he joined the club's scouting department, where he served as an area scout for six of his eight years in Indianapolis (2001-09).

On the high-performance side, the Bears hired Blair Hitchcock as director of sports nutrition and A.J. Lamb as a sports scientist. Both will report to the Clyde Emrich Director of High Performance, Brent Salazar.

Hitchcock arrives after serving as director of sports nutrition at Vanderbilt from 2018-21. As the school's first full-time registered dietitian, she oversaw all dietary and nutritional needs for the Commodores' athletic programs. Before that, she spent three years as an assistant director of performance nutrition at Texas A&M. From 2013-15, Hitchcock was a graduate assistant sports dietician at Florida State, assisting with the football program during the Seminoles' run to the BCS Championship in 2013.

Lamb brings over eight years of integrated performance experience to the Bears, most recently as a performance science associate for the NBA's Oklahoma City Thunder. Prior to that, Lamb was a supervisor/senior exercise physiologist at Zarett Rehab and Fitness in Philadelphia for five years. He also lectured in exercise science at Rowan University (Glassboro, N.J.), Penn State Abington (Abington, Pa.), and Holy Family University (Philadelphia, Pa.). Lamb currently is a PhD student at Concordia University Chicago, where he studies health and human performance.

The Bears added two positions to their football technology department with the hirings of Krithi Chandrakasan as director of football analytics and Ryan Hubley as football systems developer.

Chandrakasan spent the past three seasons with the Chiefs as a data analyst (2019), data scientist (2020) and senior data scientist (2021). In 2018, he ran the analytics operation at an early-stage technology startup. Before that, he worked as an analytics intern for the Jaguars during the summer of 2016. A Massachusetts Institute of Technology (MIT) graduate, Chandrakasan earned his Bachelor of Science degree in mechanical engineering and economics in 2017.

Hubley arrives following a four-year athletic and academic career at Johns Hopkins, where he earned a bachelor's degree in computer science, applied mathematics and statistics and was a three-time Centennial Conference academic honor roll member. On the field, Hubley appeared in 39 games at receiver and caught 230 passes for 2,644 yards and 16 touchdowns. With the Bears, Hubley will help design, develop and test tools to assist the team's football operations.

Sean Magee joins the Bears as Eberflus' chief of staff after serving as associate athletic director for football at Michigan the past five seasons. With the Wolverines, he provided oversight and direction for the football program in all off-field areas, including the management of the player personnel department, football operations and the administration of the budget for all football-related activity. He additionally served as the program's NFL liaison.

Before that, Magee served as the director of player personnel at the U.S. Naval Academy. While at Navy, Magee helped shape and manage the team's roster during the winningest five-year stretch in program history. Magee graduated from the U.S. Naval Academy in 2004 with a Bachelor of Science degree in economics. As a player at Navy from 2000-2003, Magee was a member of the offensive line that led the nation in rushing during the 2003 season. After graduating from the Academy, Magee served as a division officer onboard the USS Juneau in Sasebo, Japan, where he deployed to the Arabian Gulf in support of Operation Iraqi Freedom.