Oklahoma tops No. 5 Texas AM to kick off CWS 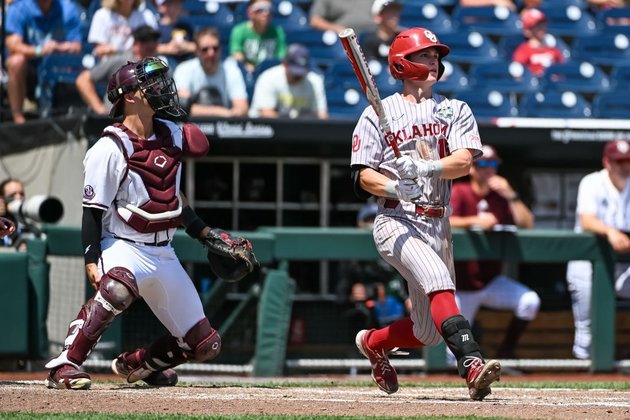 Freshman Jackson Nicklaus hit a grand slam, Jimmy Crooks added a three-run home run and Oklahoma toppled No. 5 Texas AM 13-8 Friday in the opening game of the College World Series in Omaha, Neb.

The Sooners used a seven-run second inning to take an early 8-0 lead. Nicklaus' slam in the fourth gave them enough cushion they needed to withstand the Aggies' four-run rally in the seventh.

Next, Oklahoma will play the winner of Friday night's game between No. 9 Texas and Notre Dame in the winners' side of Bracket 1. Texas AM will draw the loser of that game in an elimination contest.

Jordan Thompson hit a three-run homer and Austin Bost hit a solo shot off Bennett for the Aggies. Four straight batters drove in a run for the Aggies in the seventh off three singles and a groundout, which cut the margin to 12-8.

But Trevin Michael stopped the bleeding in that inning for Oklahoma and pitched the final 2 2/3 innings. He had three strikeouts, two of which came in the ninth.