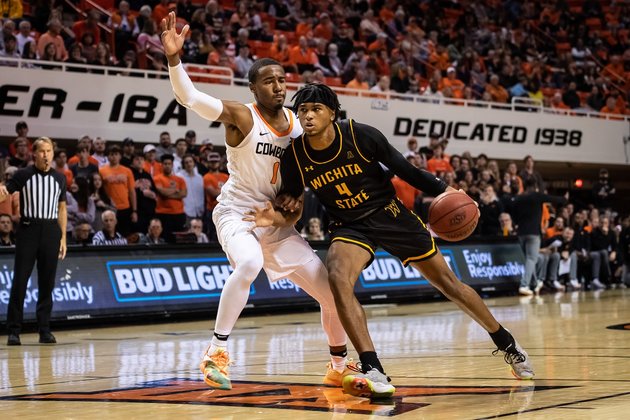 Ricky Council IV scored 12 of his 17 points in the second half to help Wichita State score a 60-51 upset win over host Oklahoma State on Wednesday night in Stillwater, Okla.

Wichita State (6-1) won its third game in a row and second consecutive game on the road against a Power 5 conference opponent.

Leading 52-51, Council hit back-to-back shots to put the Shockers ahead of Oklahoma State (6-2) by two possessions for good.

The Cowboys went the final 6:15 without a field goal and were held to 7 of 23 shooting in the second half.

Avery Anderson III led Oklahoma State with 17 points on 6 of 13 shooting and gave the Cowboys a 48-45 lead. The Shockers then closed the game on a 16-3 run keyed by Council and Morris Udeze, who finished with 13 points and four rebounds.

Clarence Jackson also finished with 10 points and four rebounds for Wichita State, and Council had seven rebounds and four assists.

Oklahoma State scored the first 10 points of the game until Council's jumper with 14:21 left in the first half got the Shockers on the board and sparked a 17-4 run, which gave Wichita State the lead five minutes later.

Wichita State went the first 7:12 of the second half without scoring as OSU opened with a 10-0 run. But the Shockers found their stroke from that point on and shot 48 percent (12 for 25) in the second half.

Wichita State used a 7-0 run to tie the game at 45 with 6:40 left in the second half and outscored the Cowboys 13-4 to retake the lead down the stretch.

Wichita State scored 25 points off 21 Oklahoma State turnovers and its bench outscored the Cowboys' reserves 34-12. The Shockers also dominated inside outscoring Oklahoma State 36-20 in the paint.

The Day the Earth Caught Fire