Oklahoma turns it on in second half to rout Houston Baptist 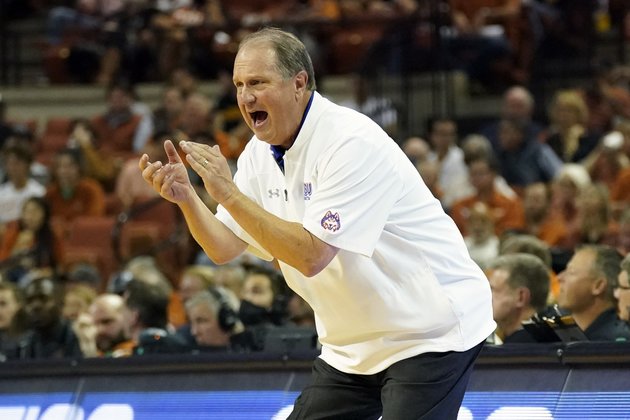 Elijah Harkless had 13 points and nine rebounds to lead Oklahoma to a 57-40 win over Houston Baptist on Wednesday in Norman, Oklahoma.

The Sooners scored 32 points on the Huskies' 21 turnovers. It was the most turnovers forced by Oklahoma since December 2017.

Early on, the Sooners struggled to take advantage of Houston Baptist's turnovers.

That changed in the second half, though.

The Sooners trailed at the break but turned up the heat defensively to start the second half, as the Huskies came up empty on their first 11 possessions out of the break.

Houston Baptist turned the ball over six times and missed their first seven shots of the second half as Oklahoma scored the first 18 points after the break to stretch their overall run to 22-0 to break the game open.

After making just 1 of 12 from behind the arc in the first half, the Sooners' offense got going by making four of their first six 3-point tries after the break.

Oklahoma outscored the Sooners 35-13 after halftime.

The Huskies were just 5 of 27 from the floor after halftime after starting the half 2-for-22.

Houston Baptist was looking for its first nonconference win over a Division I opponent since 2018.

The Huskies made a push, with a 15-2 run over a six-minute stretch late in the first half to go ahead by nine.

Oklahoma (5-1) missed 6 of 7 during the Houston Baptist run, including five from beyond the arc.

It was a continuation of a recent theme for the Sooners, who took a stretch of ill-advised 3-pointers late in Sunday's loss to Utah State at the Myrtle Beach Invitational.

Oklahoma spread it around early in the second half, though, with 3-pointers from Umoja Gibson, Tanner Groves, C.J. Noland and Jordan Goldwire over the first seven minutes.

After shooting 3 of 7 in the first half with no assists, Goldwire focused more on distributing after the break, going 2 for 3 from the field with three assists in the second half.

Does Pentagon need three-quarters-of-a-trillion-dollars every year?

Despite a disagreement over some amendments in the Senate, the United States Congress is poised to pass a $778 billion ...

BERLIN, Germany: In a bid to halt the spread of the fourth wave of COVID-19 in Germany, national and regional ...

NEW YORK CITY, New York: A former Netflix software engineer and his friend will serve time in prison after being ...

VIENNA, Austria: A surgeon who amputated the wrong leg of an 82-year-old patient in May, later describing the mistake as ...

MUNICH, Germany: German authorities announced this week that a World War II bomb exploded at a construction site next to ...

LONDON, England: The United States, United Kingdom, European Union, and Canada have agreed to tackle the ongoing migrant crisis on ...

U.S. stocks roar back as concerns over Covid variant diminish

Grab app valued at $40 billion in debut on Nasdaq

SINGAPORE: Singapore-based Grab, the major ride sharing app used in South East Asia, has made its stock market debut on ...

After decades of delays, Shell Oil gives up on UK's Cambo oilfield

LONDON, England: Shell Oil announced this week that it has abandoned its plans to develop the Cambo oil field west ...

SYDNEY, NSW, Australia - Stocks in Asia closed modestly lower Monday as markets appeared to be coming to grips with ...

US saw only 210,000 hired in November, falls short of expectations

WASHINGTON D.C.: In a reversal of the predictions of expected job growth issued by economists, U.S. employers hired only 210,000 ...

CHESAPEAKE, Virginia: Discount retail chain Dollar Tree said it will raise its prices from $1 to $1.25 for most of ...

The Man Who Fell to Earth

Man Who Fell to Earth