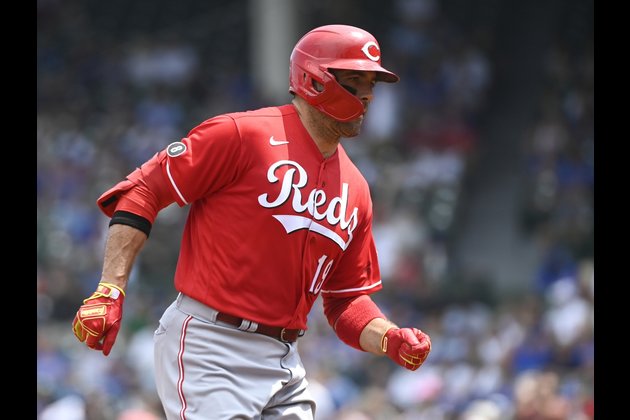 Joey Votto homered in a franchise-best sixth straight game and Tucker Barnhart ripped a go-ahead two-run single in the sixth inning to lift the visiting Cincinnati Reds to a 7-4 victory over the Chicago Cubs on Thursday.

Votto answered back-to-back two-homer performances by belting a two-run shotin the first inning. The 2010 National League MVP has gone deep eight times in the last six games to boost his home run total to 20, marking the ninth season that he has reached that plateau.

Kyle Farmer added an RBI double and scored on Aristides Aquino's sacrifice fly for the Reds, who won three of the four games in this series and nine of 13 vs. Chicago so far this season.

Luis Castillo (5-10) won his second straight start after allowing three runs on seven hits while striking out eight batters in six innings. Heath Hembree surrendered a solo homer to Ian Happ in the ninth inning before sealing the victory.

Chicago's Willson Contreras launched a two-run homer and Patrick Wisdom also went deep to lead off the fourth inning. Javier Baez went 2-for-4 in his return to the lineup after missing time with a bruised heel for the Cubs, who have lost three in a row and eight of their last 12 games.

Fernando Tatis Jr. hit an RBI double in the first inning, and Jake Cronenworth hit a two-run homer in the eighth. Musgrove (7-7) blanked the Rockies on three hits and a walk over seven innings.

Colorado's Kyle Freeland (1-6) gave up one run on eight hits and a walk, with four strikeouts, in six innings.

The Giants won two of three in the series to push three games ahead of the defending World Series champions in the National League West.

Cueto (7-5), who had been winless in four July starts, limited the Dodgers to four hits and two walks while striking out five.

Tellez, Tyrone Taylor and Pablo Reyes each added an RBI double while Lorenzo Cain had a two-run single for the Brewers, who put together a five-run sixth and won for the fifth time in six games.

In perhaps his last start for Washington, Max Scherzer picked up his eighth win of the season as the Nationals beat host Philadelphia in the first game of a doubleheader.

Scherzer, a World Series champ and three-time Cy Young Award winner, is expected to be dealt by the Nationals before the trade deadline on Friday. He went six strong innings, allowing one run off three hits with five strikeouts.

With the game tied at 1-1, Gerardo Parra led off the seventh inning with a double and then came home on Yan Gomes' 429-foot homer to center against Philadelphia starter Zack Wheeler (8-6).

Brad Miller crushed a walk-off grand slam in extra innings as Philadelphia recovered from a seven-run deficit to avoid a doubleheader sweep against Washington.

Ryan Zimmerman delivered the tiebreaking single in the top of the eighth inning to give Washington an 8-7 lead before Miller's heroics in the bottom of the frame. The homer was Miller's 10th of the season.

Frankie Montas threw seven shutout innings to help Oakland to a shutout win against Los Angeles in the opener of a four-game series in Anaheim, Calif.

Montas (9-8) allowed three hits, struck out 10 and walked three. He matched a career high for wins while throwing a season-high 109 pitches. Ramon Laureano delivered a two-run double in the three-run first inning for the Athletics, who have won six in a row against the Angels, keeping them six back of the second AL wild-card spot.

Dylan Bundy (1-8) made his first start for Los Angeles since being demoted to the bullpen a month ago. After a rocky start, Bundy recovered to throw 4 1/3 innings, allowing three runs and two hits. He struck out two, walked four and hit a batter.

Austin Meadows homered before an out was recorded and added another homer in a 10-run sixth inning as host Tampa Bay roughed up Gerrit Cole and cruised to a victory over New York in St. Petersburg, Fla.

Meadows, who hit a single in the sixth to start a stretch that saw 11 straight hitters reach safely, went 3-for-5. His second homer capped Tampa Bay's biggest inning since a 10-run frame against the Marlins on June 25, 2008.

Cole (10-6) dropped to 1-6 for his career in the regular season against the Rays by producing his worst outing as a Yankee despite striking out 10. He allowed eight runs (seven earned) on six hits in 5 1/3 innings.

Cabrera went 3-for-3 with a walk, and Eric Haase had two hits and two RBIs for the Tigers. Jeimer Candelario supplied three hits, including an RBI triple, in the opener of a four-game series.

It was the 33rd homer of the season for Guerrero (2-for-5), who trails only Los Angeles Angels star Shohei Ohtani (37) for the major league lead. Ryu (10-5) allowed only two hits and walked none to earn the win. Every batter in the Blue Jays' starting lineup drove in at least one run during the 16-hit attack.

Bobby Dalbec doubled to plate the lone run for the Red Sox. Boston starter Eduardo Rodriguez (7-6) was knocked around for six runs on seven hits while walking four and striking out eight in just 3 1/3 innings.

Hernandez (2-1) gave up four hits, with one walk and four strikeouts. He allowed one runner to reach third base.

Salvador Perez hit a two-run home run in the first inning, and Michael A. Taylor hit a solo homer and drove in another run for Kansas City.

Austin Riley continued his hot hitting with his 21st home run and three RBIs as visiting Atlanta won its third game in the five-game series against New York.

Riley was 2-for-4, and his two-run homer sparked a three-run outburst in the fourth inning that put the Braves in front to stay. He added a run-scoring single in the fifth, his 10th RBI of the series. Riley extended his hitting streak to eight games, in which he's 14-for-32 (.438) with nine extra-base hits and 13 RBIs. He has homered in the last three games and five of the last seven.

Atlanta also got home runs from Abraham Almonte, his fifth, and Dansby Swanson, whose solo shot gave him a career-high 18. Ozzie Albies drove in his team-leading 69th run.