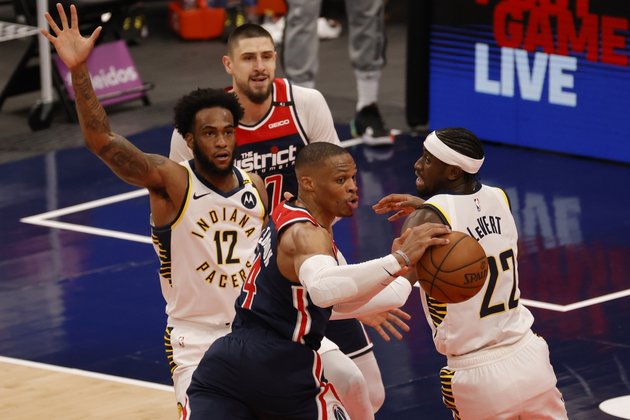 Usually, 141 points is enough to win an NBA game.

But not when you play defense as poorly as the Indiana Pacers did during a potentially costly 154-141 loss to the Washington Wizards on Monday.

And Indiana (30-34), which holds ninth place in the Eastern Conference, will look to avoid slippingfurther in the standings when it hosts another potent offensive team in the Sacramento Kings on Wednesday night.

Led by Russell Westbrook's 24-assist, 21-rebound, 14-point triple-double, the Wizards shredded the shorthanded Pacers' defense in nearly every facet. Washington had 50 assists on 63 made field goals, scored 96 points in the paint and had 30 fast-break points.

"If your first two or three steps aren't a sprint, they are going to get ahead of you," Pacers coach Nate Bjorkgren said. "Then you're really, really trying to play catch up and find who to guard."

The Pacers have dropped three of their past four and lost the head-to-head tiebreaker with the Wizards, whom they lead by only half a game in the standings. Indiana is 1 1/2 games behind the Charlotte Hornets for eighth place.

ESPN reported that Bjorkgren's future with the Pacers is uncertain with eight games left in the regular season, saying the first-year coach "has work to do on relationships with key players in his locker room and has thus far shown a willingness within the organization to try and address those issues."

"We gotta play harder, we gotta coach better, there's a number of things," Bjorkgren said. "We're all in this together."

The Kings (28-37) won their first game against the Pacers this season, 127-122 on Jan. 11 in Sacramento. Harrison Barnes led the Kings with 30 points and added eight rebounds, and De'Aaron Fox had 21 points and nine assists.

But neither may be able to suit up on Wednesday due to injuries. Barnes (left-adductor tightness) missed his fourth consecutive game Tuesday, and Fox (health and safety protocols) sat out for the sixth game in a row. Sacramento also was without Chimezie Metu (lower-back soreness) and Robert Woodard II (lower-back soreness).

Sacramento won its third consecutive game Tuesday with a 103-99 win at Oklahoma City. Buddy Hield had 18 points and 11 rebounds, and Delon Wright had 13 points, 10 rebounds and eight assists and hit a reverse layup with 18.1 seconds left to help seal the win for the shorthanded Kings.

"Good night for the Kings," Sacramento coach Luke Walton said. "Not always the prettiest of games, but we found a way to scrap out another win."

Sacramento announced that guard Tyrese Haliburton is out for the remainder of the season with a left-knee injury.

On the plus side for Sacramento, ESPN reported that Haliburton's MRI on his knee on Tuesday showed no ligament damage and won't require surgery.

"I think a lot of us were scared when it happened," Walton said. "It didn't look great."

WASHINGTON D.C.: The highest number of passengers since the start of the Covid pandemic passed though U.S. airports on Friday. ...

Mixed day for Asian stocks, Nikkei 225 in Tokyo does best

SYDNEY, NSW, Australia - Stocks were mixed in Asia on Monday while the major currencies fell slightly against the U.S. ...