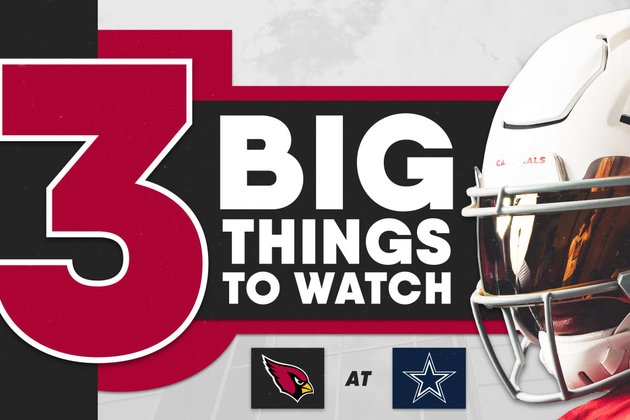 The three biggest things to watch for Sunday when the Cardinals play the Cowboys at AT&T Stadium in Dallas:

Pass rush is crucial in the NFL - duh - and losing your best pass rusher for the season is incredibly painful. No, Chandler Jones wasn't producing sacks at the rate he was at last season, but he remained the focal point for opposing blocking schemes. That's gone now. Devon Kennard was signed to be the compliment to Jones, not to be another Jones. But now that's his role. How defensive coordinator Vance Joseph works within the Jones-less parameters, whether it is in personnel or scheme, will be something to watch. COVID protocols make any additions from outside that much more difficult to pull off, either in free agency or even a trade. The Cowboys still have a very good offense, even if Dak Prescott is out, because Andy Dalton has done things before - and he has more skill talent around him than he ever has. The Cards have to find a way to make Dalton feel pressure, and make sure it doesn't undercut the rest of the defense in the process.

When the schedule came out, it was hard not to pay attention to this game, and not just because it was a national TV game against one of the league's most popular franchises. It was because of Kyler Murray, arguably the best high school quarterback in Texas history, and Kliff Kingsbury, himself a Texas boy who built his reputation in the state both as a player and a coach. Both men have tried to play down the homecomings, but it would seem to be impossible to totally flush emotions. Murray is 6-0 as a starter in AT&T Stadium, winning there five times in high school (including three state championship games) and once as Oklahoma's quarterback in the Big 12 championship. Can he overcome the emotion of the moment? Murray insists this game will be harder for Kingsbury. The Cards have a lot at stake regardless of hometowns.

Without Prescott and with one of the best running backs in the league in Elliott, the Cowboys looking to lean on their star makes some sense. Elliott has 364 yards and five touchdowns this season, averaging 4.1 yards a carry, totals that are a little low given how much the Cowboys have played from behind. But even with Dalton's experience - and talented wideouts -- the Cowboys may just turn to their bellcow. It's what Cardinals defensive coordinator Vance Joseph expects. The Cards have to be prepared for Dalton to wing it (he led the Bengals on a nice comeback in Cincinnati last year against the Cards before the Cards pulled it out) but Elliott does seem like priority No. 1.

Britain and India shore up economic and financial ties

LONDON, UK - Britain and India entered into a range of agreements on Wednesday to solidify their relationship and promote ...

NEW DELHI - India and the U.S. held a "productive" and "successful" third round of 22 dialogue in New Delhi, ...

Acute malnutrition among children in Yemen at highest level ever

Yemeni children are suffering acute malnutrition at unprecedented rates as the world's worst humanitarian crisis grinds on and funding falls ...

An outbreak of coronavirus in Ireland has been attributed to a flight from a country in the Middle East into ...

OTTAWA, Canada - Five major aerospace companies in Canada and Boeing have inked an agreement which will see a multi-decade, ...

WASHINGTON, DC - The U.S. Federal Communications Commission (FCC) is proposing a rule change that would require television and radio ...

UK needs to decide between bargaining power and negotiation strategy

LONDON, UK - Reaching an agreement in trade deals is, in the best of times, a long process. There are ...