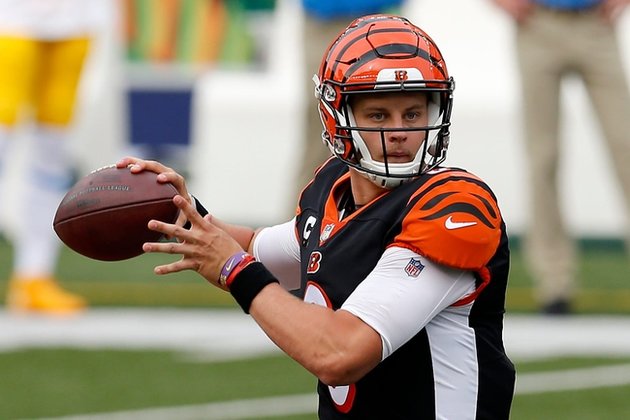 Joe Burrow's NFL debut didn't result in a victory but the Cincinnati rookie quarterback takes another shot at notching a triumph when the Bengals visit the Cleveland Browns on Thursday night.

The No. 1 overall pick from LSU has been the recipient of a ton of hype and he looked comfortable in hisfirst game even though the Bengals (0-1) fell 16-13 to the visiting Los Angeles Chargers on Sunday.

Burrow completed 23 of 36 passes for 193 yards and one interception. He did not throw a touchdown pass for the first time in a game since his 2018 college season in a loss to Alabama.

"We believe in him," Bengals coach Zac Taylor said. "There's never any doubt on that. He verified what we already knew."

Thursday's AFC North matchup could be the first of many between Burrow and Browns quarterback Baker Mayfield.

Mayfield can relate to the expectations heaped on Burrow. Mayfield was the No. 1 overall pick in the 2018 draft after winning the Heisman Trophy at Oklahoma in 2017. He is impressed with what he is seeing from Burrow, the 2019 Heisman winner.

"From the games that I saw him play last year, [he has] very decisive," Mayfield said of Burrow's performance for LSU. "He gets the ball out and gives his guys a chance. ... Obviously, I think he is an unbelievably talented guy, but I think his teammates love him and they really fight for him."

Mayfield and the Browns (0-1) will be looking to improve their performances on Thursday, when there will be approximately 6,000 fans in attendance. Ohio Gov. Mike DeWine lifted the limit of 1,500 people at outdoor gatherings for the Browns' home games against the Bengals and the Washington Football Team on Sept. 27.

Cleveland is looking to rebound after being drilled 38-6 by the host Baltimore Ravens in Week 1.

Mayfield was 21-of-39 passing for 189 yards, one touchdown and one interception against the Ravens.

One troublesome issue was Mayfield's failure to connect with receiver Odell Beckham Jr. Though Beckham was targeted 10 times, he had just three catches for 22 yards. The yardage output was the second lowest of Beckham's seven-year career, and it marked the wideout's career-long 11th straight game without posting 100 receiving yards.

Perhaps the biggest surprise was Beckham didn't reveal frustrations over the performance.

"I am just here at a point in my life where I just want to play football and I just want to win," Beckham said. "Period. There is nothing else that can distract to deter from those goals. Once I get you all, the world and everyone to understand that I care about one thing -- winning and producing."

Cleveland gave up the final 28 points in the loss to Baltimore while being drubbed in the debut of head coach Kevin Stefanski.

"We know that we have to play better and we have to coach better," Stefanski said. "That is the beauty of this thing is that we have an opportunity to do that Thursday night."

The Browns' defense will look to slow down Burrow, who played the best football of his debut on the game's final drive.

Cincinnati was down by three when it took over at its own 18-yard line with 3:08 remaining. Burrow didn't look like a novice as he completed 8 of 10 passes -- one of the incompletions was a spike to stop the clock -- for 70 yards.

That had the Bengals set up for a 31-yard field goal to force overtime. Randy Bullock came up lame as he was approaching the ball and sent the kick wide to the right. Bullock said he felt a grab in his left calf during his kicking motion and was seen holding his right calf after the miss.

Burrow then showed the type of leadership that a veteran might provide.

However, veteran receiver A.J. Green was more than impressed with Burrow.

Bullock (calves, according to the injury report) practiced Tuesday so it looks like he may be available. But just in case, the Bengals claimed Austin Seibert off waivers, one day after the Browns cut him for missing one field goal and one extra point against the Ravens.

The Browns have won three of the last four meetings. The teams split the two 2019 matchups.

WASHINGTON D.C.: The highest number of passengers since the start of the Covid pandemic passed though U.S. airports on Friday. ...

Mixed day for Asian stocks, Nikkei 225 in Tokyo does best

SYDNEY, NSW, Australia - Stocks were mixed in Asia on Monday while the major currencies fell slightly against the U.S. ...