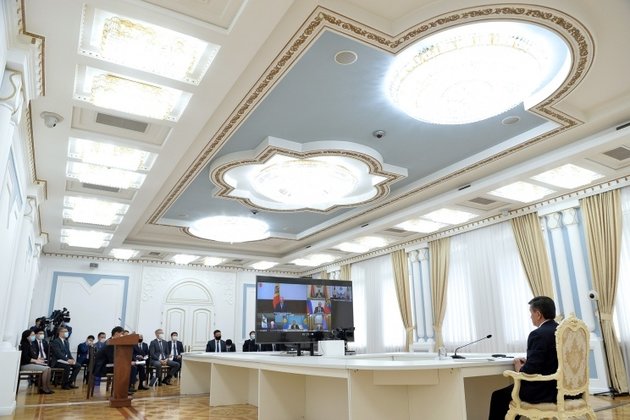 The president of Kyrgyzstan has pleaded, during a meeting jointly convened by the United Nations to discuss the impact of the COVID-19 pandemic on the global economy, for his country's debt to be restructured to allow for more social spending.

Sooronbai Jeenbekov proposed on May 28 that chunks of Kyrgyzstan's $4.6 billion liabilities could be waived in return for guaranteed pledges to invest the amounts owed on healthcare, social support initiatives, food security and the environment.

In making his plea, Jeenbekov cited conditional debt cancellation conversion rules as envisioned by members of the Paris Club of creditor nations.

As detailed in a guide to this procedure compiled by the UN Conference on Trade and Development, or UNCTAD, the forgiveness of a loan can be "negotiated between a debtor and a creditor country" and involve "the cancellation by an official creditor of a foreign currency debt obligation in exchange for a local currency counterpart fund to be invested in specified projects."

Jeenbekov argued that as a landlocked country with difficult mountainous terrain, Kyrgyzstan's trade potential has been especially badly hit by the ongoing crisis.

"By the end of this year, we expect negative economic growth and a significant fall in budget revenues. A lack of budget funds may lead to a deterioration in the social situation of the population," he said.

Kyrgyzstan has had to assume more debt to help fight its way out of its COVID-19 impasse, and in fact earlier this year became the world's first recipient of coronavirus-linked International Monetary Fund support. The IMF has lent Bishkek $342 million to assist in mitigating the fallout of the coronavirus crisis.

In the first quarter of this year, Kyrgyzstan's external debt jumped by 16 percent. The country's main creditor is the Export-Import Bank of China, or Exim Bank of China, which alone holds more than 44 percent of the debt.

The issue is whether or how China, which is not a permanent member of the Paris Club, will greet such overtures for debt relief.

Sinophobia is on the rise globally - and is already quite strong at the popular level in many parts of Central Asia - and any sense that Beijing may wish to resist loosening the grip of what some have called its "debt trap" will only fuel such ill-will. Waiving debt, on the other hand, would garner it considerable gratitude from governments like the one in Kyrgyzstan, which has proven inept in drumming up interest from a varied stable of investors, other than the usual suspects, like Russia and China itself.

Yair Netanyahu making name for himself at home and abroad

JERUSALEM - As scandal-plagued Prime Minister Benjamin Netanyahu stands trial for corruption, his 28-year-old son has emerged as a driving ...

WASHINGTON, DC - Broadway actor Nick Cordero, aged 41, has passed away after a long battle with coronavirus.According to Variety, ...

WASHINGTON, DC - The novel coronavirus is continuing to spread in the United States, particularly in the western and southern ...

Philippine government to offer jobs at home for returning Filipinos

ZAMBOANGA CITY, Philippines July 5 (PIA) - The returning Filipinos who arrived Sunday in the city from Sabah in Malaysia ...

World must be better equipped to manage crises and future plagues

Wherever one is at anywhere in the world today - given the yet unknown first, second, third, fourth or however ...

One of the lessons the current coronavirus pandemic has taught us is that we depend on electronic devices more than ...

Demand for oil may have peaked

PARIS, France - Although crude prices have rebounded from coronavirus crisis lows, oil executives and experts are starting to ask ...

Nationalism an earth-shattering trend in shaping economies of future

Former U.S. Treasury Secretary Lawrence Summers has recently conceded: "In general, economic thinking has privileged efficiency over resilience, and it ...

A million Russians predicted to declare bankruptcy in coming months

Moscow [Russia], July 4 (ANI): As countries across the globe have been facing the worst collective economic downturn since the ...