Mailbag: Will Ravens Trade Up For a Wide Receiver 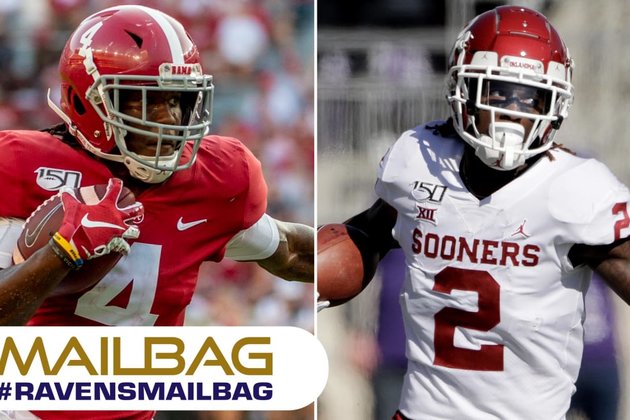 The Ravens have been busy in the first week of free agency.

But now everyone wants to know, "What's next?"

Garrett Downing and Clifton Brown dive into those question in this week's written version of Ravens Mailbag.

Downing: Trading up to get either of these receivers would be a big-time move for DeCosta. It also wouldn't come cheap. Jeudy and Lamb are the top two receivers in this class, and they could both be off the board in the first 15 picks. With the Ravens sitting at No. 28, they'd likely have to give up a haul to get either of those players. As a comparison, the Steelers sent picks in the first, second and third round to move up 10 spots in the first round last year for linebacker Devin Bush. It would likely take that type of compensation to get Jeudy or Lamb. While those two receivers are great and would be a huge addition to the offense, it's hard to see DeCosta parting ways with that many draft picks in a draft that's deep with receiver talent.

Brown: I'm not sure that this year's draft will tilt heavily toward offense. I think the Ravens will draft at least one wide receiver if not two, and one offensive lineman if not two. However, the additions they made on defense during free agency will not keep them from drafting defensive players. They still need help at inside linebacker and edge rusher. There are two inside linebackers the Ravens could take at No. 28 - LSU's Patrick Queen or Oklahoma's Kenneth Murray. The Ravens have done very well finding edge rushers in the fourth round or later like Pernell McPhee, Matthew Judon and Za'Darius Smith, and I expect them to take an edge rusher in this year's draft. While the Ravens spent free agency focusing on defense, I think their draft will address both sides of the ball, perhaps almost equally.

Downing: While I don't see the Ravens trading up to the top-15 to get a receiver, I could see them moving up a few spots for a linebacker. Queen and Murray are the natural first-round targets, and the Ravens may not want to risk losing them if they stand pat at No. 28. If we get into the 20s and only one of them is on the board, it wouldn't be surprising to see the Ravens move up a few spots to get their man.

Brown: According to multiple media reports, Breshad Perriman will be signing a one-year deal with the New York Jets. I don't think a Perriman-Ravens reunion was ever in the cards. He has revived his career since leaving the Ravens and deserves credit for that. There was a lot of pressure on him in Baltimore as a first-round pick and suffering a knee injury as a rookie really set him back. He needed a change of scenery and he has taken advantage of it. Both sides have moved on.

Downing: Hurst is a quality player, but the Ravens should be able to replace his production. Mark Andrews was already the top pass catcher at the position, and that's not going to change. Andrews had a breakout second season with 64 catches for 852 yards on his way to earning a Pro Bowl invitation, and he should be in line for similar production. Nick Boyle is the best blocking tight end in the NFL, and he'll continue to be a huge part of the running game in 2020. With Andrews and Boyle in front of him on the depth chart, Hurst had 30 catches for 349 yards last season. The Ravens could end up taking a tight end in the draft who puts up similar numbers. They could also use the second-round pick they received for Hurst on a receiver, who could bring some additional playmaking ability to the offense.

Brown: It would not shock me if McPhee re-signed with the Ravens. He was an effective player when he returned last season, getting three sacks in seven games before his season-ending triceps injury. He proved he still had something left in the tank at age 31. McPhee is a Ravens kind of player - tough with a strong work ethic. Coaches and teammates respect him, and he was thrilled to get another chance with the Ravens after leaving in 2015. Even if the Ravens draft an edge rusher or two and don't trade Matthew Judon, McPhee could be valuable both as a player and as a mentor to Jaylon Ferguson. The contract numbers will have to work, but I think a McPhee return remains possible.

WASHINGTON, DC - More than 9,100 Americans have now died from the deadly Covid-19 coronavirus, according to the latest data ...

Videos circulating on social media show Ultra-Orthodox Jews in the Israeli town of Bnei Brak coughing on police and calling ...

Conduct of Pell investigation should be reviewed

The allegations of sexual abuse against Cardinal Pell were investigated by the Victorian Police, in particular by Taskforce SANO. This ...

Hot off of singlehandedly ending the Israeli-Palestinian conflict, America's Son-In-Law-In-Chief has put himself in charge of handling half of the ...

When the wealthiest country in the world is unable to produce basic medical gear to cope with a rampaging pandemic, ...

Philippines company to produce millions of facemasks per month

CLARK FREEPORT ZONE, Pampanga, Philippines - With skyrocketing demand for face masks, following a change of experts views on their ...

World Expo in Dubai likelt to be put back by year

NEW YORK, New York - A streak of 113 consecutive months of jobs growth came to an end with data ...

Healthcare for everyone in America needs to be free

Access to COVID-19 treatment is key to helping Americans combat the disease, as well as containing its spread. To their ...

SYDNEY, Australia - It was a downhill day on Asian bourses on Friday, with all the major indices losing ground.The ...