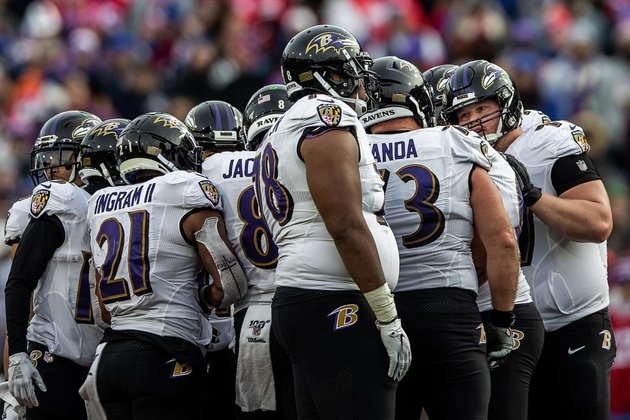 Building a team is like working on a puzzle, according to General Manager Eric DeCosta. This offseason, the Ravens began their puzzle with the defensive line.

Trading for Calais Campbell and reportedly trading for Michael Brockers will give Baltimore's defensive line an imposing look, joining Brandon Williams, Daylon Mack and two other defensive linemen who were re-signed, Jihad Ward and Justin Ellis. With the defensive front addressed, here are some other targets on the Ravens' to-do list.

As of Tuesday afternoon Patrick Onwuasor remained a free agent and it would not be shocking to see Onwuasor re-sign for another season with the Ravens. They brought back two familiar faces Monday by re-signing cornerback Jimmy Smith and safety/special teams ace Anthony Levine. Baltimore may also be able to draft an inside linebacker who's ready to start right away, if either Kenneth Murray of Oklahoma or Patrick Queen of LSU is available with the 28th pick.

The retirement of Pro Bowl right guard Marshal Yanda leaves a void. Matt Skura is also coming off a serious knee injury after starting the first 11 games at center last year, and it's too early to say if he'll be ready to start the season. Patrick Mekari, was solid as Skura's replacement and fourth-round pick Ben Powers may be given a chance to win a starting job at guard next season. However, losing someone as good as Yanda means the Ravens are likely to add at least one lineman, if not two, via the draft, trades or free agency.

Placing the franchise tag on Matthew Judon prevented the Ravens from losing the Pro Bowl outside linebacker in free agency. Judon is coming off his best season with 9.5 sacks, and as good as he was last year, he might be better in 2020 getting help from the improved defensive line that should generate more pressure on quarterbacks next season. But while the Ravens are looking for continued growth from outside linebackers Tyus Bowser and Jaylon Ferguson, expect them to add at least one edge rusher before training camp. Another former Raven who remains on the free agent market is veteran outside linebacker Pernell McPhee, who had three sacks in seven games last season before suffering a season-ending triceps injury in October. Meanwhile, outside linebacker Zach Baun of Wisconsin has also been linked to the Ravens in various mock drafts.

This is one of the deepest wide receiver draft classes in recent memory. DeCosta drafted two wide receivers last year, Marquise Brown and Miles Boykin, and it's unlikely DeCosta will be shy about drafting at least one wideout this year. Adding more young weapons for Lamar Jackson to develop seems like a good option.

Obamagate is the latest conspiracy theory to be pushed by U.S. president, Donald Trump. It started on the morning of ...

SEOUL, South Korea - The South Korean government on Tuesday launched a 'no mask, no ride' policy on buses and ...

Tensions between Beijing and Washington add to world's Covid-19 woes

BEIJING, China - China said on Sunday that its relations with the United States were "on the brink of a ...

Protesters for and against lockdowns clash in Germany

HAMBURG, Germany - German police clashed with a large crowd of demonstrators who gathered to protest against a sanctioned anti-lockdown ...

PARIS, May 26 (Xinhua) - French President Emmanuel Macron on Tuesday vowed to massively back the auto sector to help ...

SYDNEY, NSW, Australia - Stocks in Asia charged ahead on Tuesday, adding to gains made on Monday."Investors are trying to ...

HUAWEI WATCH GT 2e emerges as the bestseller on Flipkart

LOS ANGELES, California - California avocados gained access to the Chinese market as a result of the China-U.S. phase-one economic ...

SYDNEY, Australia - Tokyo and Sydney shares took off on Monday, and while stocks gained in Shanghai and Hong Kong, ...