UK gets extension for withdrawal from European Union 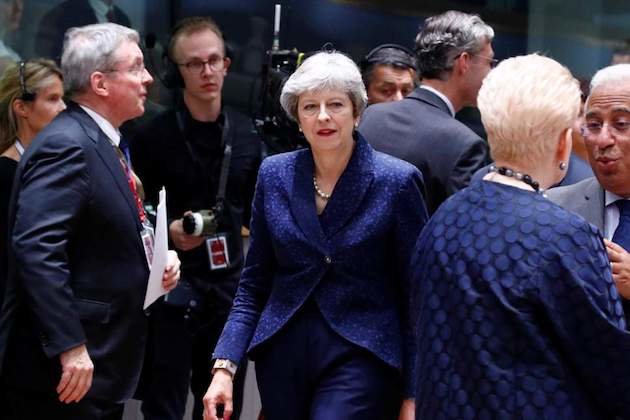 BRUSSELS, Belgium - Britain has received a two week extension to its Brexit deadline, however this could become 10 weeks if the EU withdrawal deal is accepted.

European Union leaders agreed on Thursday night to delay the Article 50 process, which means the 29 March 2019 deadline is now off the table.

The EU has agreed to push this to 12 April to allow Britain to get agreement on the withdrawal deal. If the deal is approved, the time for the withdrawal will be extended to 22 May. If it is not, the withdrawal takes place on 12 April.

British Prime Minister Theresa May says parliamentarians now have a "clear choice," when they meet next week for the third time on a crucial Brexit vote.

She said she would now commit her resouirces to getting the deal through.

"I will make every effort to make sure we can leave with a deal and move our country forward," she said Thursday night.

President of the European Council Donald Tusk said at a press conference following May's meeting with EU leaders, "all options will remain open and the cliff-edge date will be delayed."

"The UK government will still have a choice between a deal, no deal, a long extension or revoking Article 50," Tusk said.

BRUSSELS, Belgium - NATO was holding an emergency meeting of the North Atlantic Council on Friday following the death of ...

PERTH, Western Australia - The biggest explosion in the universe after the Big Bang has been discovered by scientists studying ...

Philippines military focuses on self-reliance for when U.S. forces go

MANILA, Philippines - The Philippine military said Thursday that its armed forces would survive and safeguard the nation from internal ...

59% of Venezuelan housholds not in position to buy enough food

CARACAS, Venezuela - Hyperinflation in Venezuela means that roughly one-third ofthe population more than nine million people do not get ...

Pakistan halts flights to and from Iran

ISLAMABAD, Pakistan - Pakistan on Thursday announced the suspension of all flights to and from Iran -- the Middle Eastern ...

British employment figures, but growth in wages is non-existent

A first glance at the latest commentary from the Office for National Statistics (ONS) on the UK labour market in ...

Could coronavirus really trigger a recession?

Fears are growing that the new coronavirus will infect the U.S. economy.A major U.S. stock market index posted its biggest ...

MOUNTAIN VIEW, California - Google on Wednesday announced it will invest more than $10 billion in offices and data centers ...